Leicester City have defied all the odds, exactly 5000 of those odds and gone on to win the English Premier League. The is the greatest achievement in the clubs 132-year-old history. But it’s hard to imagine exactly how unlikely 5000-1 odds are.

We’ve compiled a list of thing to help put this into perspective. We start with the most likely to happen and finish with the least likely: 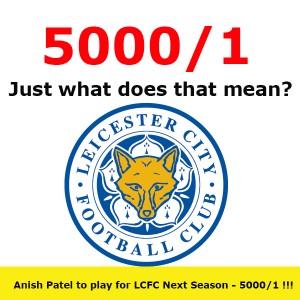