Up until about a year ago, the main board games I knew were Monopoly and Chess. However, over the last few weeks, my brother has introduced me to the world of Board gaming which I didn’t even know existed.

I know Monopoly has always been a game of luck as there is no thinking involved, you simply buy everything you land on, but I’m sure people will disagree.

I’ve always loved playing chess, I learnt at the age of 7 and I know chess has helped me to think critically, I used to play competitive chess at school and I even went on to represent Leicestershire at National Tournaments. It’s a lot easier to learn chess when you are younger, especially if you have a parent or older sibling to play against. It’s been a good few years since I have played chess but up until about a month ago, I thought chess was the only board game that could stimulate the brain, but I was wrong.

We used to regularly hold games nights with friends where we would have about 12-15 people come over and we would play games like Cranium, Articulate, Pictionary, Rapidough, Taboo and Charades. These games are great party games, but they aren’t as fun with 4-5 players and usually don’t require critical thinking. 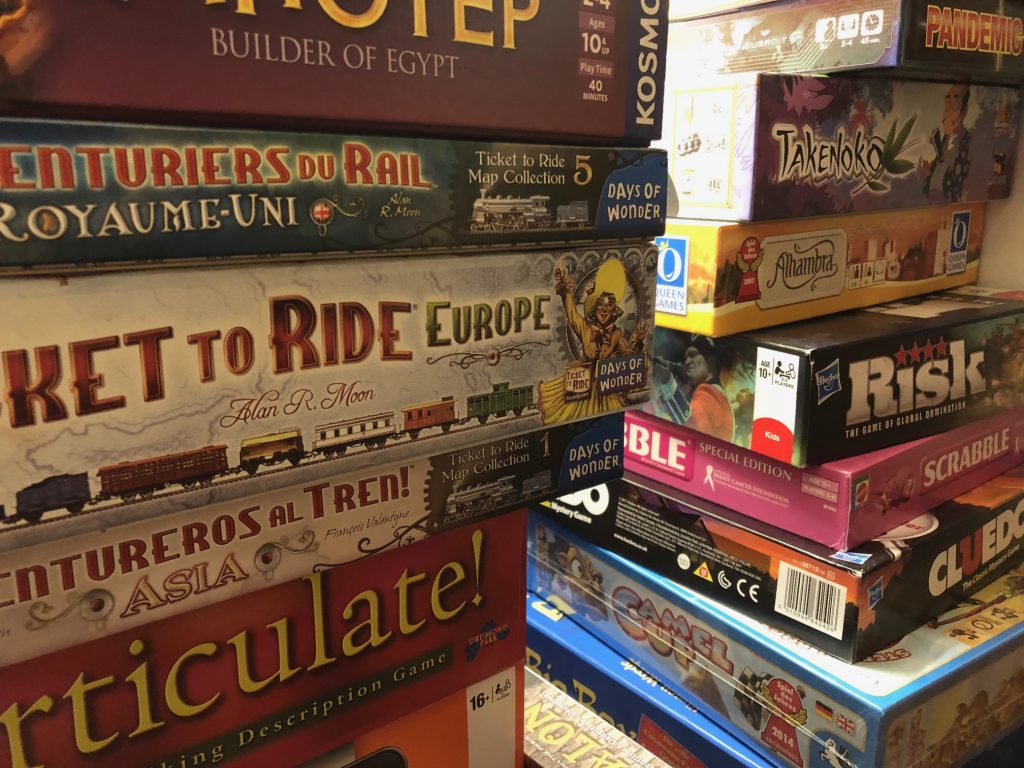 These board games will stimulate your childs brain

Over the last few months, I was introduced to a number of different types of board games which all involve a combination of luck and strategy to win. These were games I had never seen or heard of, they are best played with 3-4 players but most can be adjusted for 2 players. I will introduce you to some of the games I have played recently and later I plan to write an individual article on each game and how I feel it could help your child academically. I’m sure you’d rather have your child playing one of these games than on a Games Console.

Ticket to Ride Europe – This is a card collecting game where you make sets of the same colour to build trains on the board. The larger the train, the more points you score. There are also mission cards, which require you to complete a route from one city to another and will score you bonus points. However, failing to complete any of these missions, you will lose that many points. This is a game for 2-5 players and probably one of the best games to begin with as it’s very easy to learn and there is more luck than strategy on this one compared to many of the other games below.

The Settlers of Catan – This is a card trading game where players need to build roads, settlements, and cities by trading their resources to score points. Players receive resources (brick, wood, grain, wool, ore) from the bank if their numbers are rolled on the dice which requires players to think about the probabilities of their numbers being rolled. Points can also be scored by purchasing development cards, having the longest continuous road, and having the largest army. This is a game designed for 3-4 players, but an expansion pack can be purchased to have 5-6 players. I have managed to adapt the game to allow for two player games too. I recently came runner up in the Birmingham Regional Championships and won a seat on the National Championships

Carcassonne – This is a tile placement game where players draw random tiles and place them on the board. The tiles contain road, fields, cities, monasteries or a combination of these and must be placed adjacent to a tile already on the board and the sides must match up like a jigsaw. Road must connect to road, city to city and field to field. Players score points by placing meeples (little people counters) on the board and the game finishes when all 72 tiles have been placed on the board. Then, scoring takes place and the person with the most points wins. This is a game for 2-6 players, expansion packs can be purchased to allow up to 8 players.

Pandemic – I was sceptical about this one and initially didn’t want to play it, this is a co-operative game, where players work with each other (not against) to determine the best action on each turn, in the end, either all 4 players win, or the game wins. In the game diseases have out broken in the world and the players have to fight the disease and research for cures before the game ends. This is a card collecting and set building game where each player has a special ability. This is a game for 2-4 players and can be made more difficult by changing the cards used.

These are the games I have played over the last few weeks and I hope to write an individual article on each one in the future. All the above games require critical thinking, they sound complicated initially but once you understand the rules, they are great fun.